The Hakdoma to the Mesilas Yesharim-1 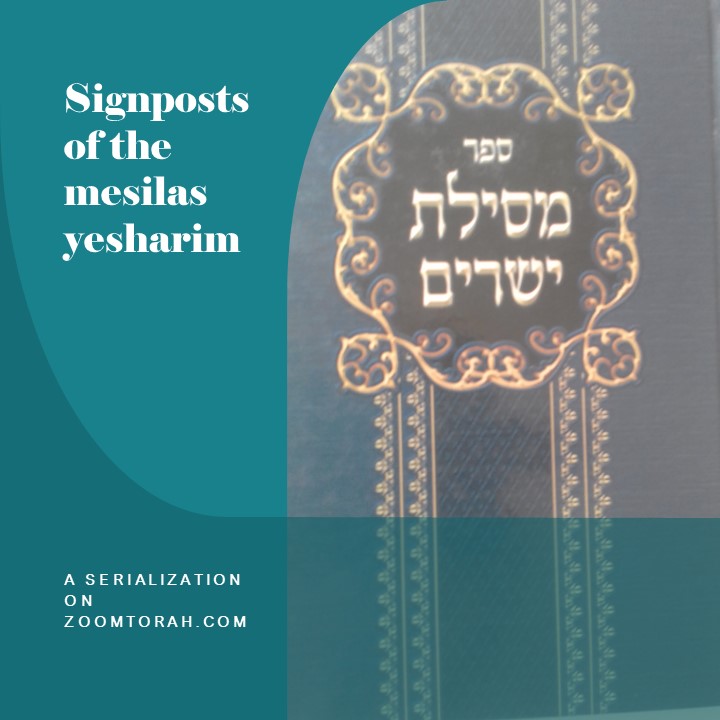 Rav Moshe Chaim Luzzato author of the Mesilas Yesharim, states in his opening paragraph that most people know much of its contents before they read it.

So why did he write it?

The purpose[1] was to help the reader remember and be mindful of these concepts. Our goal when learning Mesilas Yesharim, beyond understanding the concepts, is to internalize them and make them part of our lives.

The Baalei Mussar elaborate on the importance of mindfulness as a prominent part of self-improvement.

We feel better when we wake up on time, but we are not mindful of it.

How can we achieve that?

The method the Mesilas Yesharim provides is consistent review. When we remind ourselves of something often, it tends to be more on our mind.

Rav Yisrael Salanter adds that we can only truly internalize the Mussar of the Torah with emotional involvement, by aligning our emotions with the Torah. He therefore urged מוסר בהתפעלות, to read works of Mussar many times with great emotion.

An in-depth analysis is an important prerequisite to Mussar B`Hispaylus, because we want to internalize a good understanding of the concepts; internalizing the wrong concept would be harmful. Let us follow his lead as well, so we can learn to love what is good in Hashem’s eyes and to be disgusted by what is not.

The Mesilas Yesharim[3] here explores why society does not study Mussar and then debunks those theories. I do not believe his conclusion is relevant today but let us explore our attitude about Mussar and חסידות to check if our attitude matches the facts.

Some think that חסידות has to do with wearing certain clothing, going to the Mikva every morning, not eating peppers on פסח, talking in a certain dialect, or wearing Tzitzis out, having thick Peyos, making sure to wear a hat when going out or benching and a host of other dry actions.

Without ranking the worthiness of these, חסידות starts in the heart (see Perek יח’ for a definition).

In the yeshiva world of today, if time is taken out for Mussar at all, it is often devoted to mere reading and getting a basic understanding of the text, without expending the effort to analyze it. It is therefore found boring by some, and only those who define themselves as Mr. Frum manage to somehow get through the 20 minutes. This is a problem for both groups, the former missing an important part of life, and the latter, ignorant of the function of Mussar, are not much better off.

In other parts of society, they ask “I’m a good person, so why do I need Mussar?” These also seem to think that Mussar is merely admonishment to ‘be good’, although they may define ‘good’ quite a bit differently.

Others say or think to themselves, “my Neshoma is pure, and I will follow it and not the יצר הרע, and therefore I don’t need Mussar”.

It seems that the popular perception of Mussar, is that Mussar is a lengthy admonishment to be ‘good’.

What is Mussar really about?

One important part of the study of Mussar, is to clearly define ‘good’ in the eyes of Hashem.

Is it enough to do whatever everyone else is doing?

When we analyze the topic a sophisticated picture emerges, far from the simple perception some have. In Sefer איוב it says, הן יראת ה’ היא חכמה, and Chazal say that here הן means one. Chazal are telling us, that the one and only חכמה is יראת שמים. It is clear that יראת שמים is not a simple thing, and to know it well it must be intensely analyzed. Shlomo HaMelech said (משלי ב’ ד’) אם תבקשנה ככסף וכמטמונים תחפשנה, אז תבין יראת ה’. In other words, in order to attain יראת ה’ it is necessary to search for it, analyze the subject. Otherwise we remain with our first impression of it, filling in the rest with our imagination. Mussar, far from mere admonishment, strives to define perfection in the eyes of Hashem.

Another part of the study of Mussar, is to clarify the steps necessary to achieve that perfection. We are not born with fear and love of Hashem and wholesomeness of heart and cannot expect to acquire them without planning well and working hard.

There are also impulsions that push us in the other direction, and there is a need for good tactics to neutralize those forces. Analysis of these and exploring how to neutralize them, is another part of Mussar.

It is clear, that to acquire the חכמה of being a שלם, a serious effort must be made.

[1] In the last paragraph the Mesilas Yesharim adds that he also wrote it to teach himself. He probably means that he clarified these concepts to himself through writing them.

[2] If one is mindful and still cannot improve in those areas, an analysis is called for. Good professional help may be needed.

[3] He says that Mussar and Chasidus are not studied by those who considered themselves smart, to the point that one seen learning Mussar and working on his Avodah was presumed to be stupid. He adds that therefore most people have a mistaken understanding of what Mussar and חסידות are. I do not believe that the misconception he refers to is prevalent today, but Mussar is still unpopular.